Let’s now return to an aspect that emerged during our analysis and mentioned above, that is the blade manufacturing cycle. We have indeed noticed that even the blades of the same type are different from one another: for example, the grooves do not end at the same point, the left side of the blade is thicker than the right side, etc. These differences, even if they do not involve important changes in the point of equilibrium, on the other hand, certainly have an impact on the duration, and therefore directly or indirectly through duration, on the tendency to abnormal brackages.

From our visual examinations on the blades we have to say that the production cycle is not completely under control, with some difficulty in replicating the same movements of the machines that print or forge the blades in the same way. If we add to this that even the raw material, ie steel, has its variability of chemical composition and performance, then we understand why when we buy two blades of the same type we already know that they can behave in a very different way, considering that the operating conditions (intensity of training, competitions, season, etc.) contribute to the final result.

In fact, the production cycle already has its complexity: the steel rod is heated up to a certain temperature and the shape is changed through a certain number of molds. At this point a series of finishing operations are carried out and then the blade is heated again and subsequently tempered, ie cooled in an oil or water bath. It is the hardening that guarantees the mechanical characteristics of the blade, in particular the obtaining of a certain microstructure will then determine the mechanical properties (hardness, maximum breaking load, etc.).

Abnormal breakage (1) refers to the breaking of the blade which has a fracture surface not perfectly perpendicular to the blade length: here below is an example of an abnormal breakage, on the right a perfect break. 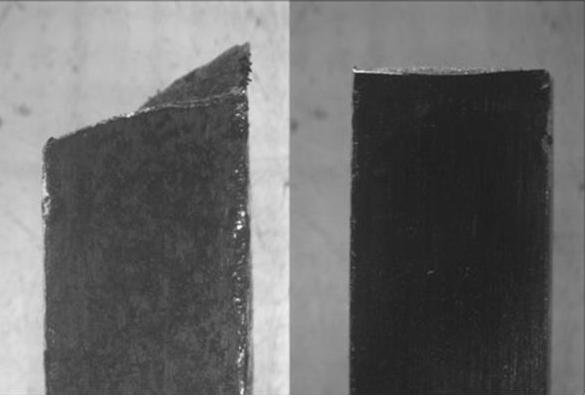 As of September 2016 we have monitored all the blades of our saber fencers in terms of durability (some blades) and abnormal brackage (all blades).

On 168 blades of different brands, we recorded that on average about 50% of the blades showed abnormal breakage. This is a fairly high value, growing compared to the values measured during the last season. The abnormal breaking of the blade, due to the creation of a sharp point capable of piercing the various protections, represents a rather high risk for the athlete hit by the broken blade. Fortunately this year only one accident occurred  which was not serious.

Athletes on the pistes often are not aware that their protections have been perforated. Sometimes even the referees do not notice it.

The uniforms are certified in terms of perforation resistance: on the label we can read the value of 800 Newton (N), which represents the minimum value at which the fabric must resist during a test carried out in the laboratory under certain conditions. If the uniform is perforated, various things may have happened:

In the latter case, we return to the regulations: under what conditions is this test performed? Or rather, is the test still able to reflect the real cases that can occur during a bout? The regulations for example demand that the temperature of the test is between 20 ° and 25 ° and the relative humidity between 50% and 55%, presumably because they are the parameters that can be more easily maintained in a laboratory, but they are not those typical of a saber bout. Does temperature and humidity have an effect on the behaviour of the fabric during the test (and therefore during the bout)?

It would be interesting, for example, to carry out some perforation tests on the fabric of the uniform, using some pieces of a blade broken in an abnormal manner.

Hint: check the electric jacket and look for any puncture holes. If you find them check if the material is completly perforated. In the event of a positive result, check  the jacket of the uniform underneath if, in correspondence of the hole on the metal jacket you find some signs of puncture. In the event of a positive result, then the uniform must be replaced, while the electric jacket must be repaired.

During this fencing season we monitored the durability and safety (tendency to abnormal breackage) of many blades of different origins used by technical, dynamic and intermediate sabers, both male and female.

A picture emerged that led us to identify a blade performance parameter, able to classify the various blades (4).

It is clear that some types of blade always break abnormally, regardless of the type and sex of the athlete. Other blades, on the other hand, have a percentage of abnormal breakages that depend on those parameters.

Through our knowledge then the phenomenon of abnormal breakages is a phenomenon whose impact on our athletes can be minimized only through statistics.

If there is a blade, which although always breaking abnormally, had a very high duration (say 200 bouts), it would be preferable to a blade that, although presenting a percentage of abnormal breakages lower (say 50%), but had a significantly shorter duration (say 40 bouts). In the same time of use (1000 bouts) in the first case in fact there would be at most 5 abnormal breakages, compared to 12 for the other blade.

This example, close to cases we have examined this year, clearly demonstrates that the duration of the blade has a direct impact on the statistics of abnormal breakages, and therefore it is convenient, athlete for athlete, to orientate towards blades with longer duration to reduce the risk of accidents due to abnormal blade breaking.

The Blade A, although costing four times the blade B, thanks to its durability, is much safer and therefore cheaper than the solution B.

Thanks to this monitoring system we have reduced to a minimum the statistics of possible accidents due to abnormal breakages because for example we no longer use some blades that are particularly dangerous.

We have also verified from an economic point of view the advantage of using some blades compared to others, keeping in mind the objective of reducing the incidence of anomalous breakages.

A final consideration: however, we must always bear in mind that these are evaluations made on the data monitored this year in our club. Last year the data was slightly different, next year it could be equally different. The decision to use a blade or not can not depend on the Master, and it can not be his responsibility if he assembles an expensive blade for your son that does not last as expected.

HERE IS THE FIRST PART OF THE ARTICLE

HERE IS THE SECOND PART OF THE ARTICLE