We continue to publish the studies of MSc. Andrea Mazzarano Materials Development Centre (technological centre of the RINA Group) on the breakage of … blades:

“But let’s go back to the shape and analyze the similarities and differences of the following blades that we tested in our club, from left to right: LeonPaul Etoile, Absolute Silver, StM, HS, Allstar,” U “, LeonPaul Blue, Dynamo, Absolute Gold. 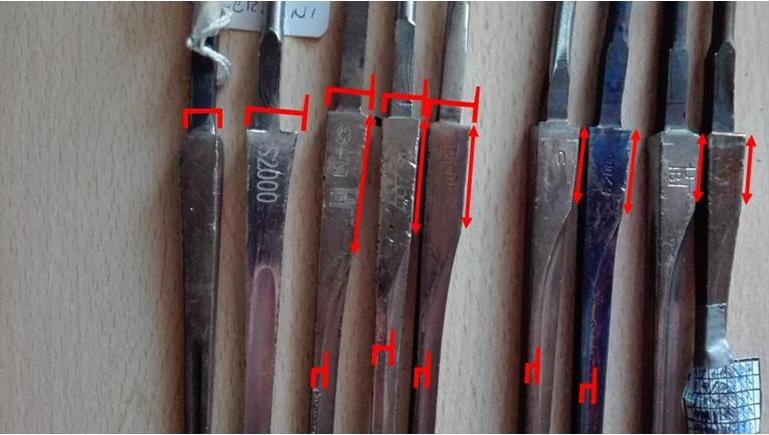 The first four blades from the right, namely Absolute Gold, Dynamo (PBT), LeonPaul Blue and the unknown “U” (this did not even present the S2000 stamp, but could it be sold?), are geometrically very similar, with the start of the grooving from below the guard that goes roughly the same distance for all four blades: same manufacturer?

Dynamo (PBT), LeonPaul Blue and the unknown “U” have a “Y” shaped section with thinner shoulders. We can assume that the manufacturer is the Ukrainian Dynamo Lugansk factory (even if on its site its blades are stated to have a “V” section). Absolute Gold instead presents a softer profile, with a “V” section, without pronounced shoulders.

From above we can see some differences, presumably undesired which are the effect of the inconstancy of the production cycle, as evidenced by the different width of the upper shoulder profile in the central blade, with the left shoulder much wider than the right one, see the photo below: 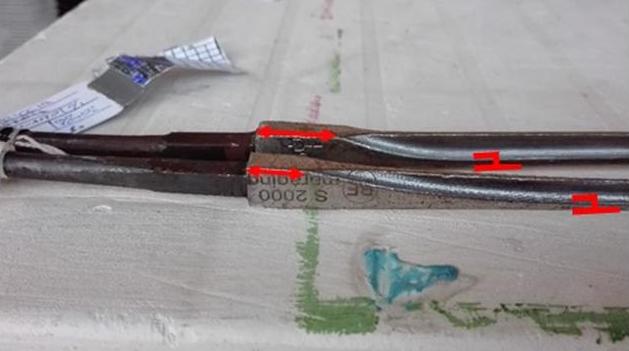 These differences could affect the “sensitivity” offered to the fencer by the blade, perhaps also on its total weight, presumably nothing about the duration and the tendency to abnormal breaking. However, these last two aspects deal with the profile evolution towards the tip, that is, how the lighter area is designed.

From this point of view the most original designs are those of Leon Paul Etoile and the Absolute “silver” (and its counterparts starting from RS). The first one has two parallel grooves on the lateral sides, that is, it has an “H” pattern. The second presents a very soft, “V” design, like the “gold” one.

The various blades also differ towards the lower part of the blade: The picture below shows the differences between the Dynamo (PBT) at the top and Absolute Silver at the bottom. As can be seen both the blades have a widening at  the lower part towards the tip, due to the need to transform the “Y” profile into a rectangular profile. This change, however, presents itself in a different position in the two blades, which will affect the balance point of the blade. 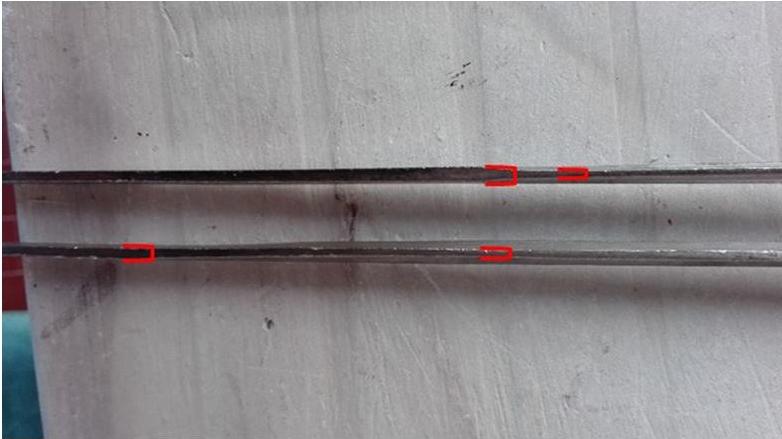 Moreover, and this is very peculiar, the aforementioned FIE regulations (2) declare that the blade should be “approximately rectangular in section”, that is, as those of foil. However, all saber blades are rectangular next to the guard and close to the tip, that is, only for a few of the 88 centimeters of their useful length. The remaining part has very different forms from the required rectangular: perhaps the time has come to standardize the regulation.

In particular, the suggestion is to simplify and leave total freedom of choice for producers, requiring that the blade (and not the material) passes a series of tests.

On the contrary, unfortunately, and we do not understand the reason from the technical-scientific point of view, there are no bending tests for the saber blades in the elastic and plastic fields, as for foil  and epee blades. It is impossible to obtain a numerical comparison on the effect of the shape on the duration and, more importantly, on the tendency to abnormal brackages.

For example, it would be very interesting to have a maraging steel blade made with an “H” or “V” design, and, why not, with a foil type design, that is, with a rectangular section along the whole length: would the blade last longer? Could lighter blades be obtained? Would they be less dangerous?

Finally, considering the evolution that has recently been seen in saber fencing, with a very significant increase in the speed of actions, in particular at the centre of the piste and weight of the athletes, it might be useful to know the behaviour of the blades subjected to bending tests at different speeds. It is in fact known (1) that the deformation speed modifies, even to a significant extent, the behavior of the steel, in particular in presence of thin sections, such as those of saber blades near the tip. In a forthcoming article in fact (3), the impact velocities measured during an assault approached 8 meters/second, ie about 30 Km/h for athletes from the cadet category (as the sum of the speeds of the two athletes at the centre of the piste, after the ready, steady, go!).

The photo below shows a BF-PBT maraging blade, folded plastically at an angle very close to 90 ° shortly after a “ready, steady, go!”. Bearing in mind the exceptional performance of steel maraging (in fact the blade did not break), that the blade has been bent to a point where the “Y” section is still very marked (we are in the first third of the blade), and that the athletes on the piste were two cadets,  the blade should have remained straight bending elastically. 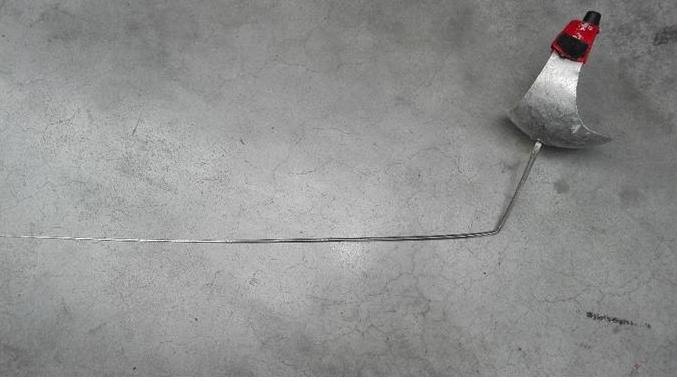 It must therefore be considered that given the geometric similarities (but also of price), it is believed that most of the choices related to the blades offered are dictated by economic considerations, also due to the lack of attention on behalf of the  customer (the fencer)  when purchasing blades, as they can break one or more per week. ”

HERE IS THE FIRST PART OF THE ARTICLE

HERE IS THE THIRD PART OF THE ARTICLE