MSc. Andrea Mazzarano begins to draw conclusions of the work he is conducting with Maestro Vincenzo Castrucci on saber blades! Enjoy the reading!

“For almost two years we have been following this path which, with the SS Lazio Scherma Ariccia, we have undertaken on the theme of safety and duration of saber blades.

When we started this work, someone said that the problem was not economic and did not concern the duration, but only the safety of the athletes. Now we can say that the duration of the blades is a key parameter in increasing the safety of our athletes and, as many of you have appreciated, the duration has a significant economic impact … in the sense that many parents are spending less in saber blades, for the same safety.

But let’s go in order, also because there is a lot of information collected and we want to share it with you, together with some suggestions that we hope to obtain.

First of all, we were able to confirm a qualitative feeling: there are gentle male and female saber fencers and rough ones.

We have divided them into technical (gentle), dynamic (rough) and intermediate .

Dynamic does not mean that he has no technique, but that his movements are more rigid or that he uses more force: all this has an impact on the life of the blade.

Considering a technical saber fencer, the same type of blade used by a dynamic saber fencer can last even two or three times as long.

Hint: ask the Master of your son/daughter  what kind of fencer he/she seems to be, so you immediately understand if you are going to spend a lot of money or not on blades!

All athletes have their own preferences in terms of saber behavior, that is balancing and stiffness of the blade etc., but this has a real impact only for our children, while it does not apply to those of the highest level who, being sponsored, do not pay the blades and are “forced” to use the sponsor’s blades.

The behavior of the blade is determined by three main factors:

A suggestion: if you have sky channel look at the “Fire of swords” program (channel 407 in Italy), you will probably have an idea of how the blades are manufactured, blades which your child is so stubbornly trying to break.

in a previous study (1) it has already been verified that at least three different types of chemical composition of the steel are used by the producers: two are for spring steels, the third is the well-known maraging steel, the one with which the carriages of airplanes are made. Here we must emphasize that for the International Federation (FIE) regulations (2), the blades of the three weapons can only be manufactured with maraging-type steels. Moreover, with regard to the S2000 stamping on the saber blades, we could not find any FIE document mentioning it and explaining its meaning. It must be a blacksmith’s thing.

Moreover, in the FIE regulations, a separate discussion should be started, dealing with the requirements for the homologation of the blades which are essentially not fully applied or verified, at least to what is understood, for saber blades.

On the microstructure of the steel of the saber blades a differentiation has already emerged, which is highlighted  in (1); however, only one of the four blades featured in that study satisfied the minimum requirement of hardness. No blade tested in that study was manufactured with maraging steel.

On the shape we must first take into account the effect of the density of steel, equal to about 8Kg per litre: if “moved” along the blade 1 cc3 of steel, that is a cube with a side of only 1 cm, I’m moving about 8 grams. Although this may seem a very minimal value, compared to the weight of a blade, which can range from 180 to 150 grams, we are talking about 5% of its weight. Moving a few millimeters of steel from here to there on the blade means changing the balance point of the blade, its behavior during exercise and the sensation it gives the athlete (heavy, balanced, etc.).

Analyzing breakages and durations of the various blades we realized that blades marked differently and bought by different traders presented the same shape. Take for example some maraging blades which show all the BF markings, the name of the French producer Blaise Freres. Regardless of the merchant’s brand, they present the same shape.

Below, from top to bottom we show the ‘forte’ (top part near the guard) of a maraging Allstar, PBT and LeonPaul. The Allstar and PBT are identical, with the same head that resembles a right-angled triangle, while the LeonPaul has an isosceles triangle shape, presumably chosen to distinguish its blade and to offer a different balance. 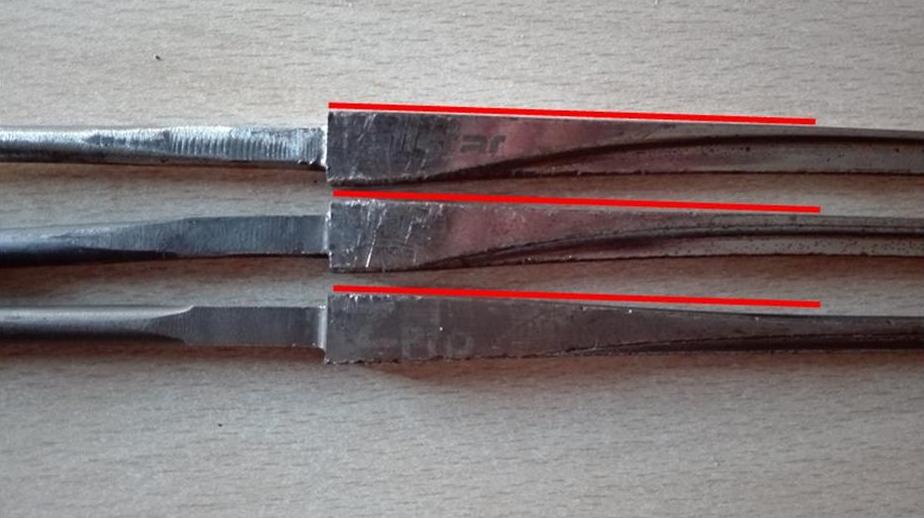 The same shape is also present on three very common blades differently marked : the Absolute “silver” on the left, in the middle the RS (the colour is given by a coating) and on the right the UhlmannFencing. Guess who also presents this form in the catalogue? Chinese producer Jianlisport from Shanghai: is he the only true producer? There is nothing wrong with it, the blade is fine. A bit of commertial transparency would not hurt.

Also in this case we have not been able to find other information, neither on the seller’s sites, nor on the FIE site. On the FIE site we find the list of “producers”: where we discover that the American Blue Gauntlet reports the BG S2000 Extra Light Saber BLADE (Y Style), sold for $ 17, which is  the same blade produced by Jianlisport (in the site referred to as the Shanghai sport company). Since it is presumable that the supplier is the same for everyone, it is better to buy the less expensive!

At this point we are forced to introduce a very important concept, often underestimated. By producer we mean someone who produces an object, but someone who sells an object manufactured by another is called a seller, even if he applies his own brand mark. It would be appropriate to clarify in order to obtain greater transparency. In our opinion it would be more serious for the Federation to demand sellers to explicitly declare when their blades are manufactured by others.

For example, PBT on its website explicitly states that its material is designed and manufactured in Hungary or in other EU countries, with the exception of the well-known Dynamo and StM blades (which are manufactured in Ukraine, which is in Europe but not in the EU), even if the PBT logo is affixed to the blade. UhlmannFencing on its website uses the same photo (otherwise blurry) to indicate 4 different blades, including maraging (but saying that it is BF).

In what seems to us a confusing panorama, the responsibilities of the producer and of the seller are not clear at all in the case of a blade that would be defective at the origin, because for example it breaks at the first parry. Who should I blame it on? ”

HERE IS THE SECOND PART OF THE ARTICLE

HERE IS THE THIRD PART OF THE ARTICLE

This website uses cookies to improve your experience while you navigate through the website. Out of these, the cookies that are categorized as necessary are stored on your browser as they are essential for the working of basic functionalities of the website. We also use third-party cookies that help us analyze and understand how you use this website. These cookies will be stored in your browser only with your consent. You also have the option to opt-out of these cookies. But opting out of some of these cookies may affect your browsing experience.
Necessary Always Enabled

Any cookies that may not be particularly necessary for the website to function and is used specifically to collect user personal data via analytics, ads, other embedded contents are termed as non-necessary cookies. It is mandatory to procure user consent prior to running these cookies on your website.